Tiger Woods' DUI arrest - how does it effect you?

Tiger Woods' DUI arrest - how does it effect you?

Most people's response is: "it doesn't."  In fact, it does.  DUIs, whether cause by alcohol or drugs, are a very real problem in the DC area.  Every day, officers, deputies, and troopers are making DUI arrests on our highways and streets.  DUIs are a pervasive problem, and one you face every time you drive a car, ride a bike, or even walk down a street.

This news story spread like wildfire because it featured a golf pro, someone that once graced cereal boxes and advertisements.  This story spread because the perpetrator is famous.  But the truth is that DUIs are sadly common, and effect each of us.

Drivers who operate vehicles while intoxicated and/or impaired, whether by drugs or alcohol, are an ever-present danger on our roadways, and the accidents caused by them hurt innocent victims.  People run off the road, struck at traffic lights, or rear-ended suffer greatly in both mind and body, and like any accident victim, they amass medical bills, lose time from work, and experience mental and physical anguish.

A drunk driver who has caused an accident and injured someone may be liable not only for the damages that driver caused, but also punitive damages.  Punitive damages are a legal judgement designed to punish the wrong-doer, and prevent future harmful actions. Punitive damages are seldom granted in Virginia cases, but receiving them can be done. The Annotated Code of Virginia specifically allows it.

The Alexandria Injury Attorney, Joseph Blaszkow, was one of the first attorneys in Virginia to successfully argue for and receive a substantial award of punitive damages for his client who was injured because of the negligent actions of a driver who was under the influence.

If you, a friend, or a family member, have been injured due to the negligence of a driver who was under the influence, call our office today for a free consultation.  We will work hard to get you everything you deserve. 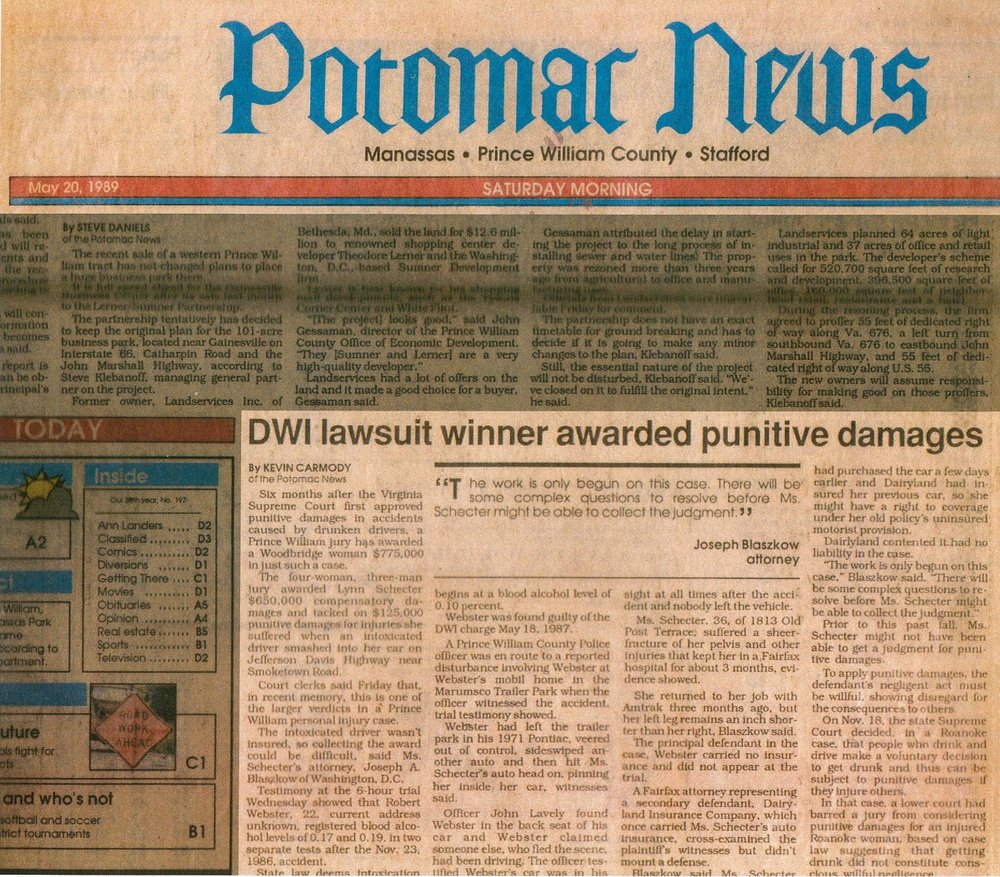 A Point of Privilege - An Analysis of Executive Privilege
Dash-cams: A Wise Investment?